Caribbean Islands are the most popular destination in the yachting world or nautical tourism during the winter season, especially for the Europeans.
Islands consists of three major regions as follows: 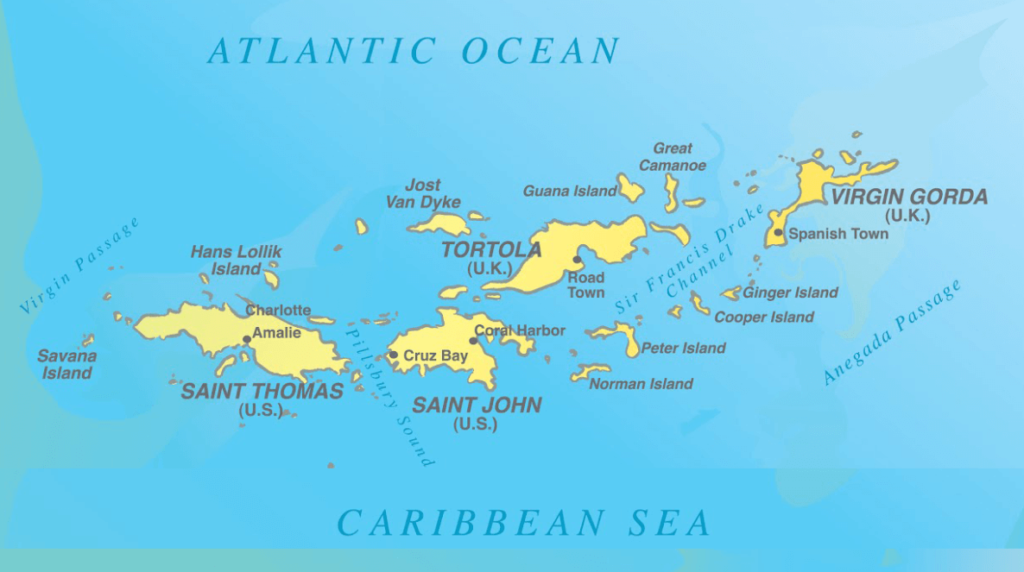 The British Virgin Islands (BVI) are made up of about 50 smaller islands and islets which are mostly small and many are still uninhabited. The BVI is mostly unspoiled by tourism with some of the nicest weather in the Caribbean. Development is limited The tales things you will see is coconut trees swaying in the breeze, since no building on the island can be more than two stories high.
Tortola, the largest is the most developed and most populated island Virgin Gorda, the second largest of the BVI ans is world famous for ‘The Baths’.
Other smaller islands include Jost Van Dyke, Anegda, Peter, Norman and many more isles are awaiting for your arrival. Tortola is the hub of the British Virgin Islands. People come for its top notch beaches, banks, customs and the best range of hotels, restaurants and nightclubs. 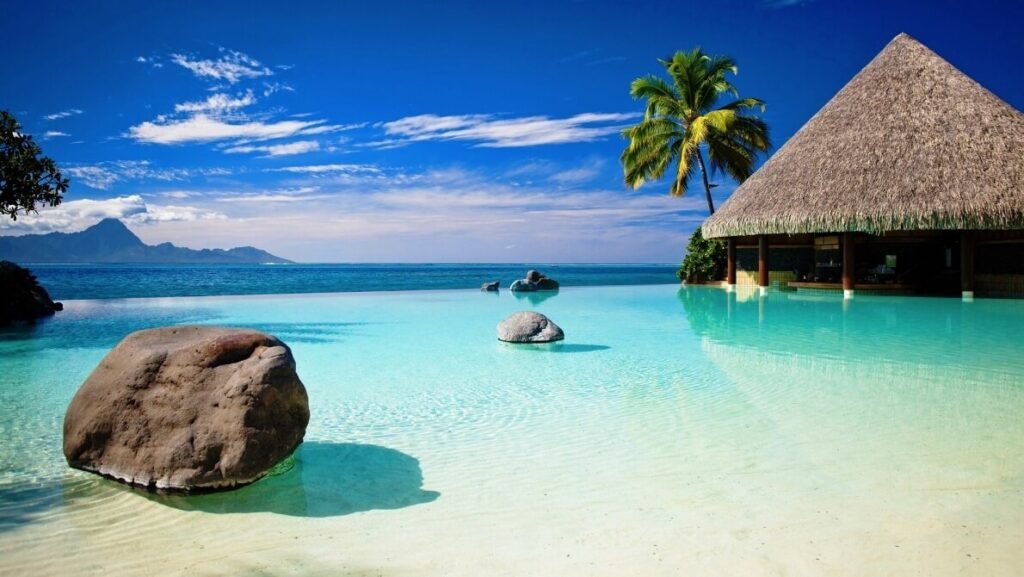 The Virgin Islands are considered one of the finest sailing grounds in the world. They offer sunny weather, dependable trade winds, beautiful scenery, protected anchorages and short passages between islands. Chartering a sailboat, catamaran or yacht is unquestionably a fantastic way to explore the islands. Imagine your honeymoon; cruising into quiet anchorages, eating dinner on the water at sunset or running down a sandy white bay on an unpopulated island. Picture your family vacation; kids enjoying the beach and the whole experience of it all and adults enjoying everything from water sports and romantic sunsets to special time with the kids and the relaxing environment.
US tropical paradise. St Thomas has some of the best white-sand beaches in the Caribbean, notably at popular Magens Bay, an oversized scallop of sand and palm trees that shows up on lists of the top ten beaches of the world.

Anguila
Anguilla is a 16-mile-long coral formation created by a geologic uplift which created numerous bays, salt ponds and the beautiful beaches we see today. The earliest inhabitants were Amerindians. Their tools, discovered on the northeast part of the island, date to 1300 BC. By the sixth century, large villages were occupied in what are now Rendezvous Bay and Sandy Ground. The Anguilla Archeological & Historical Society has unearthed thousands of artifacts, some of which can be seen at the Heritage Collection in East End.
The British settled here in 1650.
The local government, concerned with retaining the island’s natural resources and inherent beauty, has kept growth to a slow pace and therefore not allowed casinos. You will find the surroundings peaceful, the service superb and the people friendly. The island is known as a retreat for celebrities, and is sometimes called the “South Beach” of the Caribbean. 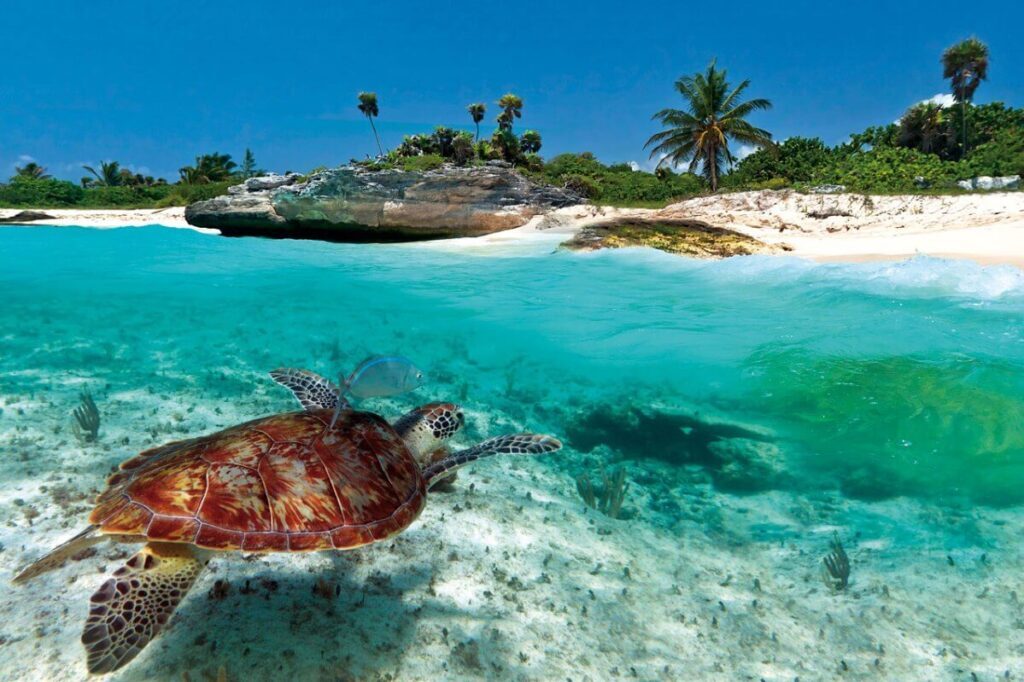 Antigua and Barbuda
Antigua is best known for its 365 beautiful beaches, magnificent dive sites and interesting historical maritime sites. It is also known as a major Caribbean yachting port.
Barbuda is Antigua’s sister island although it could not be more different. In Barbuda you will see a Caribbean island that is unspoiled by tourism and is renowned for its natural, beaches, sprinkled with pink sand and miles long. The island has the deep blue Atlantic on one side with wild beaches full of driftwood and shells and the calm Caribbean sea on the other, perfect for swimming and snorkeling, with plenty of opportunities to see turtles and many varieties of tropical fish undisturbed in the turquoise water. The beauty of the island is in its natural, peaceful way of life – it is not for visitors who are looking for nightlife or entertainment – it is a place to relax, slow down, and make your own.

St.Kitts and Nevis
Separated by a two-mile channel, St. Kitts (officially named St. Christopher) and Nevis are in the northern part of the Leeward Islands in the Eastern Caribbean. St. Kitts covers 68 square miles, while Nevis which is to the south east of St. Kitts is 36 square miles. St. Kitts is a stunning combination of volcanic mountains, rain forests and beautiful beaches. Although St. Kitts is known as a quiet and tranquil island, its capital Basseterre is in the midst of a revival. In addition to restored historical architecture, Basseterre also boasts a selection of new shops and charming cafes. Nevis is known for its natural beauty, genteel plantations, quiet hospitality and pristine beaches. Nevis’ capital Charlestown is a well-preserved old Caribbean town offering visitors interesting shopping and dining. 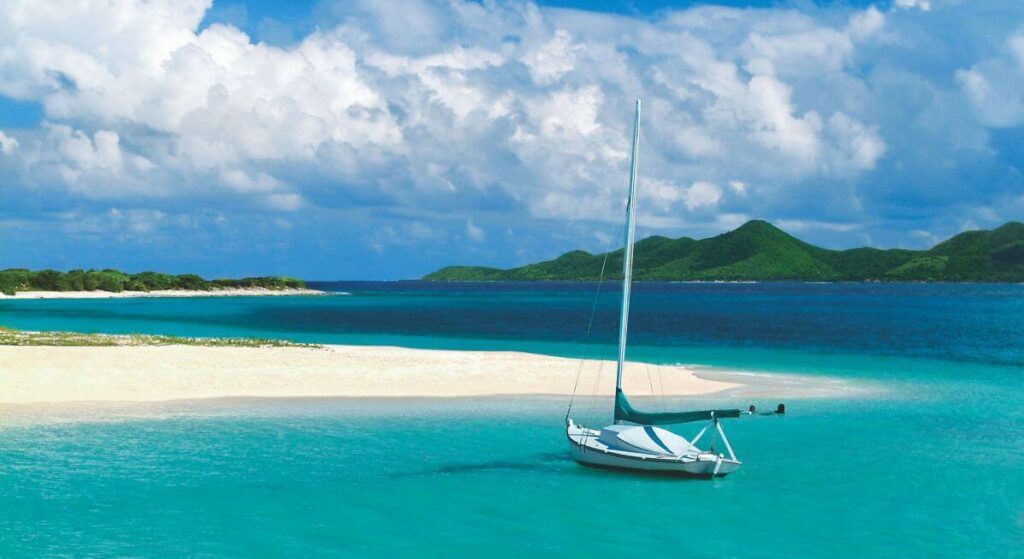 St.Martin
It’s not quite as cosmopolitan as Martinique, nor is it the royalty and rock star magnet that is chic St Barts – nevertheless, with its fine French restaurants, the best duty-free shops in the Eastern Caribbean and glorious beaches, St Martin easily slips into the ‘Tropez of the tropics’ category.More than a major gateway to the rest of the Eastern Caribbean, St Martin also offers visitors two countries for the price of one: St Martin takes up half the land on its island home, and the Netherlands’ Sint Maarten takes up the other half, with no border controls in between.
Sint Maarten is one of the most touristed islands in the Caribbean, but despite the large resorts, casinos, fast-food chains and a sophisticated capital, it still has quiet niches to explore. There are powdery white-sand beaches, secluded coves and good diving.

St.Barts
St Barthelemy, was named by Christopher Columbus on his second voyage in honor of his brother, Bartholomeo. Commonly referred to as St. Barts, it is a chic and luxurious gem of the French Caribbean. Caribbean luxury seekers and the rich and famous make this one of the premier jet set destinations in the world. Caribbean vacationers will find 22 of the most stunning and scenic beaches with views of near-by islands on St. Barts. Almost all of the white sand beaches have a distinct flavor of their own. St. Jean Beach may be the most famous as it resembles the Cote d’Azur beach in France complete with beach-side bistros, small hotels and sun worshippers revealing under umbrellas and cabanas. At beach Anse de Gouverneur you will have views of St. Kitts, Saba & St. Eustatius.
The secluded beach of Grande Saline is known for its wild beauty. The waters of Grand Cul de Sac is shallow and reef protected so it is a favorite with wind surfers and near by Marechal Beach is the spot for snorkeling. Caribbean hideaway.

Windward Islands
St Lucia was outside the routes taken by Columbus on his four visits to the New World and was probably first sighted by Spanish explorers during the early 1500s.

In St.Lucia There are fine swathes of sand and good swimming on the northwestern coast between Gros Islet and Pigeon Point, and at Choc Beach and Reduit Beach. The southwestern coast has plenty of secret coves and bays, but many are accessible only by boat. The Vieux Fort area, at the southern tip of the island, and Cas-en-Bas, on St Lucia’s northeastern coast, are popular with experienced windsurfers. The Soufriere area has the island’s best-known geological features: the twin volcanic cones of the Pitons, which rise up some 760m (2500ft) from the shoreline, and the hot bubbling Sulphur Springs just inland from the town.

Puerto Rico
Christopher Columbus landed in 1493 on the Western side of Puerto Rico. With its strategic location, Spain installed a colony on the island, and for the next 400 years it was under the control of the Spanish Colonial Government. The system of fortifications that were built in the late 16th century, designed to protect the Bay of San Juan still stand as a proud display of military architecture. Included are two large forts and a system of fortified city wall. Condado, east of Old San Juan, is the closest thing to Miami Beach outside of Florida. With all the high-rise hotels and the haute couture boutiques, you could be forgiven for thinking you’d taken a wrong turn at Hispaniola. If you like your Caribbean with a twist of Vegas, this is the place. The walled city of Old San Juan is a seven-square-block historic precinct of narrow cobblestone streets, pastel-colored colonial architecture and shady plazas. It’s located at the western end of San Juan Island, surrounded by sea on three sides and laden with the atmosphere of a bygone era. 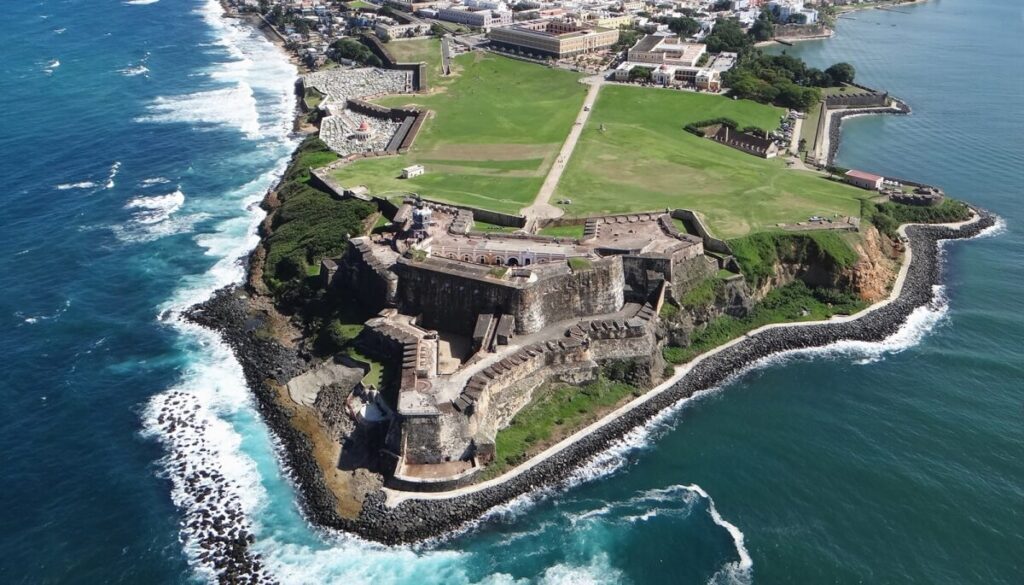