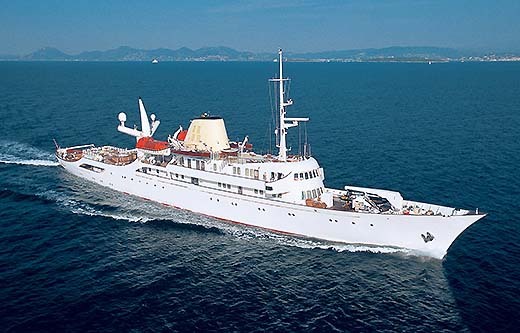 Christina O was built in Canadian shipyard Vickers in 1943 as wartime frigate. She was converted into superyacht in German shipyard HDW – Howaldtswerke-Deutsche Werft GmbH in 1954. Her exterior styling was done by Caesar Pinnau, Costas Carabelas and her luxurious interior by Apostolos Molindris & Associates.
Her next extensive and major refit was in Croatian shipyard Viktor Lenac in 2001 thereafter by John Paul Papanicolaou, Onassis family close friend, thereafter in 2011 one more major refit was done in French Shipyard H2X, where all cabins are completely renewed, swimming pool/dance floor and machinery.

What to say about this lady? The most legendary yacht owned by Aristotle Socrates Onassis and where most of celebrities for ex. Maria Callas, Winston Churchill, Frank Sinatra, Elisabeth Taylor, U.S. President John F. Kennedy and Jackie Kennedy, Eva Peron, King Farouk, Tito, and many others have enjoyed time on this legendary yacht.

The Christina O, was also the venue for two of the greatest parties of all time; when the fireworks reception of Grace Kelly and Prince Rainier of Monaco’s marriage and Aris Onassis and Jackie Kennedy’s wedding party were held on board.

The magnificent vessel is now the only mega yacht with this certification worldwide, capable of accommodating up to 34 guests in 17 luxurious staterooms catered by a complement of 39 officers and crew.
14 cabins can be either of double or twin bed configuration.

In addition, the mega yacht Christina O, assumes her supremacy as the preferred venue for all occasions- prestigious galas, international launches and a variety of cultural and corporate events for up to 250 guests on her canopied decks.

We use HYBA (Hellenic Yacht Brokers Association) contract that is designed to standardize charter terms and protect the Charterer ( You) , the Owner, and the Agent/Broker.

Charter fee is paid in two rates ; 50% of charter fee when the charter contract is signed and 50 % 4 weeks before charter commencement. Extra expenses are charged with Advance Provisioning Allowance (APA). APA is usually 25 % to 30 % of total charter fee and also depending on your itinerary, food, beverages etc. Captain will keep accurate records of funds spent during your charter and at the end of the charter, you will be refunded the difference, or you will asked to pay more during the cruise if further running costs are incurred.