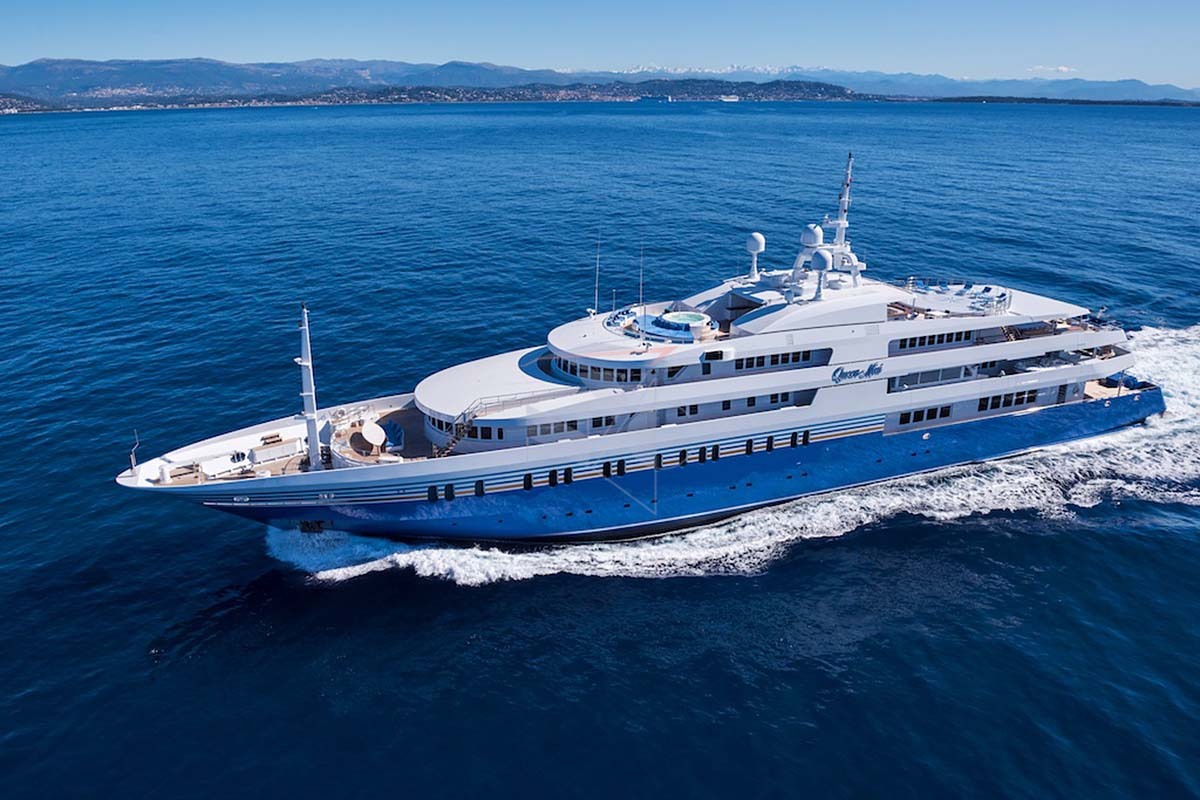 Queen Miri ex.Delma is a luxury charter yacht built by the Neorion Shipyard based in Greece launched in 2004 as Annaliesse. Naval architecture and exterior styling is by Alpha Marine Ltd/Lally Poulias with an amazing interior by Lally Poulias and Studio Massari. In 2016, she went to an extensive refit/conversion done in the Italian Genoa based shipyard Amico & Co where she was extended to 91.50m from 85.30m as follows: new foundation, main engines replaced, props and shafts, aux generators, electric and electronic systems i.e complete power management replaced, new Jacuzzi on the sun deck, new flood able tender garage on the aft deck that is convertible into a heated seawater swimming pool, exterior and the interior re-designed, implemented new state of the art audio-visual systems throughout the vessel. Queen Miri is in pristine condition and ready to accept new charter guests wherever she is.

Queen Miri boasts an amazing teak laid sun deck offering a Jacuzzi with over sized sun pads, a bar, karaoke, AV gear and the dance floor and sun loungers in the aft. Bridge deck offers an Al-fresco dining area in the aft and BBQ’s, a luxurious bridge deck salon with lounging areas, gaming table and a bar. Queen Miri sleeps up to thirty-six charter guests in eighteen staterooms. The master suite situated on the upper deck level forward features a king-sized bed, a large marble laid bath, his and hers walk-in wardrobes, outdoor deck terrace, an amazing panoramic view of her cruising destination directly from the bed, a study and adjacent twin cabin with two single beds and shower en-suite. Upper deck also houses two twin staterooms each with two single beds and two double staterooms each with a king-sized bed of course with en-suite facilities. VIP stateroom is based on the bridge deck level forward of salon and features a king-sized bed, a study, private lounge and study, spacious marble laid en-suite. Next to the VIP stateroom there is one twin stateroom with two single beds and shower en-suite.

Main deck houses large salon with lounging areas, baby grand piano, a bar and two formal dining tables for her guests. Forward of main salon there are five double staterooms each with king-sized beds and three twin staterooms with two single beds in each and shower en-suites, while her lower deck offers a Spa with Jacuzzi, saunas, a GYM with commercial grade exercise gear, beauty salon, massage room, two beach clubs in the aft on the port and starboard side and flood able tender garage which is convertible into a large a heated seawater swimming pool and Jetstream.

Queen Miri a Det Norske Veritas DNV classed vessel is powered with two MTU 20V4000 M93L diesels developing in total 5848 BHP push her full displacement blue hull of 3420 GT up to 17.0 Knots while she cruises at 15.0 Knots with max range of 7.000 Nautical Miles @ 14.0 Knots supported with the underway stabilizers and while at anchor. She is manned by a professional maritime crew of thirty-six which will make your yachting vacation aboard this breathtaking super yacht unique and unforgettable.